Known to God from eternity are all His works.  Acts 15:18

In February of 1998 a team from Intensive Care Ministries travelled to Ghana to conduct Inductive Bible Study Seminars with various church groups.  Seminars were held in Accra and the Volta regions and a trip to the North was planned for Seminars in Paga and Sandema. 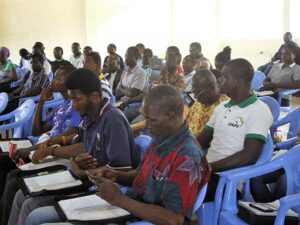 As the team prepared to travel north to Paga and Sandema, they heard about a joint medical mission to the same area conducted by Christian Missions Resource Foundation in Accra, Africa Christian Missions of Ghana, and The First United Methodist Church of Tulsa, Oklahoma.  The medical mission was designed to meet basic medical needs and preach the gospel through child evangelism with puppets and through outdoor public projection of the “Jesus” film. Christian Missions Resource Foundation (CMRF) was led by Dr. Samuel Annankra from the Military Hospital in Accra and his team included nearly one hundred young medical volunteers and children’s ministry volunteers. The First United Methodist Church sent a team of physicians and provided the projection equipment and the “Jesus” film which they had translated into the local language.  Africa Christian Missions of Ghana (ACM) had a missions training school in the Volta region and together with CMRF supported missionaries to the Northern Region. The team from Intensive Care Ministries was invited to join the medical mission team and its function was to conduct Inductive Bible Seminars and teach in the local churches.  A strong relationship between the groups began on the very first mission and the Intensive Care Ministry team was invited to participate in the medical missions that were conducted over the next few years.
The Intensive Care Ministry team realized that there was a great need for Bible Teaching in the Northern Region.  Thousands were coming to faith in Jesus Christ through the work of the medical mission outreaches, but, unlike the Southern Areas of the country, there was a shortage of Bible teachers.  Each year, as the team travelled North for the medical missions, the need for Bible teachers became increasingly evident, and God gave the team a love for the people and their needs.  All of the other essentials of life that are more readily available in other parts of the country, medical services, proper nutrition, education, pure drinking water, good roads, reliable source of electricity, sanitation, and so forth, are a serious challenge in the Northern Region.  As the team pondered how they could best serve the people in the Northern Region, God reminded them of the occasion when the lame man asked Peter and John for Alms.  Peter answered the man “”I have no silver and gold, but what I do have I give to you. In the name of Jesus Christ of Nazareth, rise up and walk!”  The team understood that a small group of men and women could not solve all of the problems that may exist; they could, however, give freely what they had received from the Lord Jesus Christ.
So, in 2000 after harvest season, a team from the USA travelled to the ACM campus in Amedzofe to meet with four (4) farmers from Builsa who wanted to learn more about the Bible.  The intent was to spend as much time as possible together before the rainy season when the farmers needed to return to plant their crops.  The purpose of that first gathering was simply to help the men learn how to study the Bible as they were led verse by verse through the New Testament.  The group did not intend to start a Bible college or anything of the sort; Ghana has many fine institutions, Bible colleges, Seminaries, and such,  that are available for students to attend.   The mission was simple, learn the Inductive Bible Study method and study the Bible.
The program was simple:
1 Listen to tapes of Pastor Chuck Smith of Calvary Chapel Costa Mesa as he taught verse by verse through the New Testament.
2 – Learn the Inductive Method of Bible study
3 – Pray together and grow together in the love and knowledge of Jesus Christ.
Soon after the first group began meeting together, people in the Volta Region heard of the program and joined the group.  When the first session ended the farmers from the Northern Region returned to their farms, however, because there was such interest in the community surrounding Amedzofe, the team decided to continue on with a new session in the Old Testament.
While the team’s original plan was to teach a handful of farmers during the dry season,  The Lord had other plans.  Since that first group first met in 2000 the  program “Calvary Chapel Bible Training Centre” has continued with three – fifteen week sessions every year.  The program has not changed over the years, even though Pastor Chuck has gone to be with the Lord, we still listen to him teach verse by verse through the New Testament and the Old Testament.  We learn how to study the Bible using the Inductive Bible Study method which enables our students to understand and teach the Bible without commentaries or other helps that may not be available in their communities.  The Training Centre was subsequently moved to its permanent home, its beautiful ten acre campus in Pepease.
Calvary Chapel Bible Training Centre has always considered the needs of the Northern Region foremost in its planning.  Hence, preference is always given to students who travel from the Northern Region to the Training Centre with the express intent to go back to the Northern Region and serve in their local churches.  Since the Training Centre can accommodate more students than typically come from the North for any given session, students from other regions and countries are accepted as incoming students.
Throughout Western Africa, more than 1,200 students have attended two – fifteen week sessions and have studied verse by verse through the entire Bible at Calvary Chapel Bible Training Centre.

To train men and women in Inductive Bible Study and take them through a course of study in the Old and New Testament.