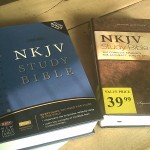 V1-2 Jesus took the trade of Joseph as a Carpenter and was known in the village as a carpenter. But at this time He was not coming to them as a carpenter but as the son of God with the word of God.
V3 the people knew Jesus very well. Note that Joseph’s name is not mentioned and may be an indication that he had died at this time and that may make Jesus the bread winner of the house being the elder son. Contrary to Catholic belief Mary had other children as mentioned here. Mary did not remain perpetually a virgin.
Many of the students that come to our training Centre go back to their communities to share with them the things of God after God had done a work in their Life. The people get offended because they used to know some of them as Rascals, thieves etc. They fail to see the work that God has done in the lives of these guys. Their countrymen get offended at them.
V4-5The people couldn’t benefit from the work of God because they would not listen to Him or believe in the word that Jesus Preached.
We should not be discouraged when our people reject our ministry because they know our former conduct. Jesus has been in the same situation and we are in good company. Paul had had the same problem of reaching out to his own people the Israelites as seen in Acts 22. Even in that, God will use us to reach out to that smaller group He wants to reach.
The people missed the opportunity to be patched and taught by the Lord
V7-9 Jesus asked them not to take those things that today we worry about everyday;
1. bag–
2. Bread-what we will eat
3. Copper-financial support to buy things we will need
4. Two Tunics-what we will wear.
These are some of the things that many people worry about and won’t go out to do the ministry.
He forbade them from taking these so that they will go out believing in God’s provision. Some years ago there were two of our former students who after they had finished training were doing nothing. So, I met them one day and asked what the Lord was speaking to them about. Their response was that God had spoken to them about being missionaries but they were waiting for someone to support them. Now,if you don’t go out and start doing what God has asked you to do, how would anyone see the need to support nothing? They still haven’t gone out because the support hasn’t come.
V10-12 If they were received in a house and later offered by someone else to come and stay in their house, they weren’t to move to the new place. This is good advice Jesus is giving because if we move from place to place, it indicate that you despise the help you received when you were in need and there was no place for you to lodge. My wife and I were in this situation some years ago when we went to do ministry in a certain village. A family received us in their home and though it wasn’t a comfortable place, we were glad to have a place to stay in. Later as we were ministering in the community we had an offer from one family who had a much comfortable house and wantedus to come stay with them. We were torn between accepting the offer and rejecting it, because the house we were presently staying in was uncomfortable. Finally I told my wife we would reject the offer because Jesus had asked us not to move from house to house. Even though the family we were staying with urged us to go, when we chose to remain with them, they were so happy we stayed. If we had gone they wouldn’t have said anything but wouldn’t have been happy about it.

V30 Here is the first time the disciples are called Apostles which means,“sent ones”. Jesus sent them out. The term “Apostle” wasn’t a title.
V31 it is important that we rest after a hard work but if we keep on going we will breakdown one day. If we rest we recuperate energy so that we can continue in the next day very strong.
V32-44 Though He miraculously supplied them their need He didn’t want anything to be wasted.
Jesus cares for the needs of the people He is ministering to. He could have sent them to nearby villages to look for food to eat or ask them to go home. But didn’t do that but sought to provide for their needs.
V45 Jesus didn’t jump in the boat and disappear with His disciples. He made the disciples go away while He stayed behind to send the people away. This indicates again Jesus’ care for the people.
V46 Jesus still had time to Pray even though the day was a very busy one.
V47- 56 In another account of the story, when Jesus said he was the one, Peter said: if it is you,let me walk on the sea to you. Peter was the first man to walk on the sea, and this was so because his eyes were on the Lord and when he took his eyes away and looked around him he began to sink.
Note that Satan didn’t send them and they didn’t go of their own accord. But Jesus sent them to go to the other side and yet they met problems.
Chapter 7
V1-5 This was not the hygienic washing of hands we know about but a ceremonial washing of hands, to cleanse any defilement they may have if they hadunknowingly touched a Gentile or anything unclean. They have a special way of washing to prevent even further contamination.
V6-7 How pathetic it is when people go to church and worship God with only their lips; when they go to church just to entertain themselves.
V8-13 In this country there are many people who will prefer to follow what some man(pastor or prophet) has told them even if you read them a scripture that is contrary to what they are told. They prefer the teachings of Man to the word of God.
V14-16 Many churches today have rules that if a person would obey them he will be a righteous person. But righteousness is of the inside not from obeying certain rules. Some prescribe that we wear long white robes, remove our sandals before entering the church, not wear make-ups etc.
V17-23 Evil thoughts, adulteries fornications, covetousness etc. do not come from outside of us, they come from inside and when they mature they come out.
V24-30 Jesus was not insulting this woman but reminding her that the blessing she is asking for is not for the Gentiles now. The word dog used in the text means a puppy and lives in their houses. They do not share in the food given to the children in the house. But the woman also reminded Jesus that those puppies eat the crumbs that fall off the table while the children eat. She was ready to get anything available from the lord. Even if she would not get the meal itself, she could get the crumbs. We should be like this woman who is content with anything the Lord might have for her.
V31-37 Here Jesus did something He had not done elsewhere before. God doesn’t have a pattern in doing things unlike some of us who try to pattern Him. If we prayed for someone and he was healed, the next time that we are to pray for another person we want to do exactly the same things we did the other time as if we discovered how God now works. God doesn’t have a particular way of doing things. He is God. His ways are not our ways.

To train men and women in Inductive Bible Study and take them through a course of study in the Old and New Testament.